*{Blog Tour Stop}* My Date From Hell By Tellulah Darling 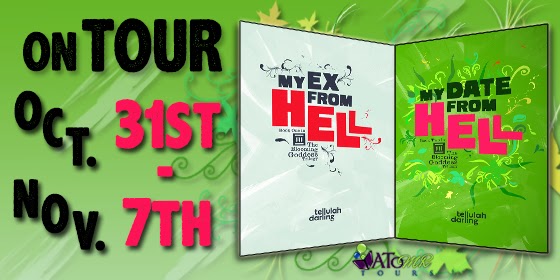 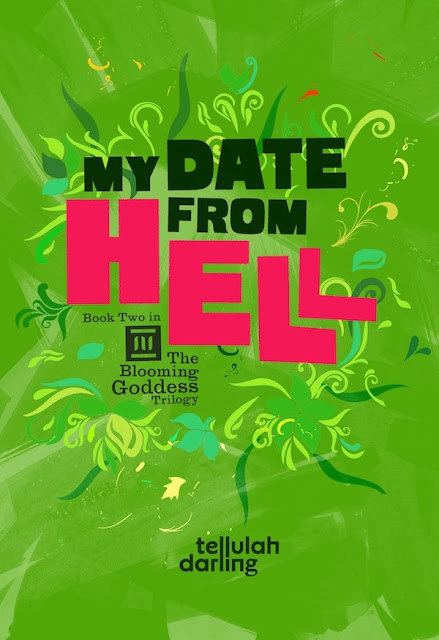 Sophie Bloom’s junior year has been a bit of a train wreck. After the world’s greatest kiss re-awakened Sophie’s true identity as Persephone (Goddess of Spring and Savior of Humanity), she fought her dragon-lady guidance counselor to the death, navigated mean girl Bethany’s bitchy troublemaking, and dealt with the betrayal of her backstabbing ex, Kai (sexy Prince of Darkness). You’d think a girl could catch a break.

With Zeus stepping things up, it’s vital that Sophie retrieve Persephone’s memories and discover the location of the ritual to stop Zeus and Hades.

So when Aphrodite strikes a deal that can unlock Sophie’s pre-mortal past, what choice does the teen goddess have but to accept?

The mission: stop media mogul Hermes from turning Bethany into a global mega-celebrity. The catch? Aphrodite partners Sophie and Kai to work together … and treat this suicide mission as a date. Which could work out for Sophie’s plan to force Kai to admit his feelings for her–if she doesn’t kill
him first.

Add to that the fact that BFF Theo’s love life and other BFF Hannah’s actual life are in Sophie’s hands, and suddenly being a teenager—even a godlike one—seems a bit like … well, hell. Whatever happened to dinner and a movie?

The YA romantic comedy/Greek mythology fireworks continue to fly in My Date From Hell. Love meets comedy with a whole lot of sass in book two of this teen fantasy romance series. Breaking up is easy; dating is deadly.

The author is hosting a contest on her site to give Sophie’s power (her vines of light) a cool name because everything she’s come up with sucks. The winner will get a signed copy of My Date From Hell, a t-shirt featuring a design of one of Kai’s tattoos and will have their power name featured in the final book of the trilogy. Contest runs Oct 21-Nov 7. Details and entry (as of Oct 21) here:
http://bit.ly/1evuIp0

All my female leads have some element of me in them. With Sophie, that’s absolutely her snarky voice and her insecurities. I was totally that mouthy teen, using sarcasm to deflect my constant over-thinking of everything that was wrong with me. And like Sophie, I was the girl that had great guy friends but hadn’t really dated. Although, again, her and I both believed in that fated soul mate.

Sophie is really comfortable with coasting under the radar and not really exerting herself, so finding out she’s a goddess and responsiblefor saving humanity really throws her for a loop. She lives in a culture
where terms like “diva” and “goddess” get tossed around a lot. Andgiven she’s at a stage where she needs to figure out what makes her special, I wanted to force her on every conceivable level to define what being “divine” means for her.

What I love about Sophie is no matter how big the obstacle, she doesn’t back down. She is stubborn – sometimes to a fault – but that stubbornness encompasses so much. Stubborn in her loyalties, even if
everyone else doubts them, stubborn in her beliefs that she can emerge victorious, can have a happily-ever-after. I love that she digs in, digs deep, and goes for it.

In terms of her physical appearance, she’s fairly average – height, brown hair, body type – until her goddess self is awakened. Then her hair becomes dark, lustrous and ringleted. Her eyes turn brilliant green and she gains a couple of inches in height. She continues to hold out hope for
a bigger cup size. Even though she does get these goddess upgrades, she
isn’t suddenly a supermodel. She’s a good-looking girl now, for sure, but those are a dime a dozen. For me, I mostly forget about what she looks like in the face of her overwhelming personality. But to give you a sense of what she could look like, check out this photo of Hailee Steinfeld: http://www.fashiongonerogue.com/hailee-steinfeld-graces-fashion-
march-2013-cover-in-lanvin/

Other Books In The Series : 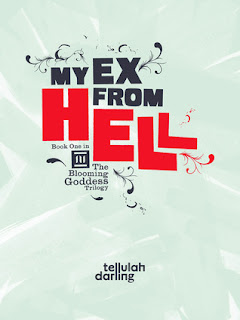 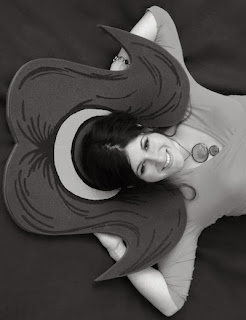 Geeks out over: cool tech.
Squees for: great storytelling.
Delights in: fabulous conversation.

*Giveaway*
a Rafflecopter giveaway
Posted by Jannat Bhat at 06:00