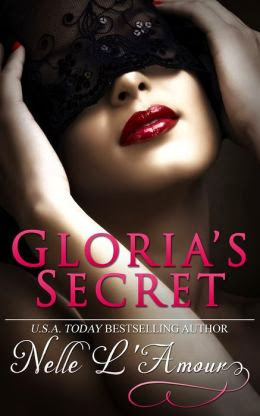 ON SALE to celebrate the release of GLORIA'S REVENGE! Regular price is $2.99

A man who has never heard the word “no,” Jaime takes his creativity to the limit to make Gloria fall apart and fall for him. But major obstacles stand in the way--Gloria’s Secret’s ruthless Chairman, who covets Gloria and is out to destroy Jaime, as well as his manipulative sexpot daughter, who wants both Gloria’s job and her hot, new love. Complicating matters further, Gloria harbors a dark, horrific secret, that when exposed, will shatter both her empire and her life. Will she be able to have it all or will the walls come tumbling down?

This approximately 225-page adult novel will be followed by the suspenseful and steamy sequel, Gloria’s Revenge, in October 2013.

Nelle L’Amour is a New York Times and USA Today bestselling author who lives in Los Angeles with her Prince Charming-ish husband, twin teenage princesses, and a bevy of royal pain-in-the-butt pets. A former executive in the entertainment and toy industries with a prestigious Humanitas Award to her credit, she gave up playing with Barbies a long time ago, but still enjoys playing with toys with her husband. While she writes in her PJ’s, she loves to dress up and pretend she’s Hollywood royalty. She aspires to write juicy stories with characters that will make you both laugh and cry and stay in your heart forever.


Nelle loves to hear from her readers. Connect to her at: Twitter
Posted by Jannat Bhat at 22:24